Early retirement has a number of advantages, one of which being extra time to go travelling. Which is what I'll do the early summer of 2018, across the USA, on my 1970 MZ ES250/2. For the uninitiated, this is a 250 cc single cylinder, two stroke motorcycle, built in the former East Germany. More about that bike later.

In 1982 I went coast-to-coast on a 1950s Nimbus, a Danish, hardtail 750 cc inline four. Started out in New York City, and when three months later I reached Portland, Oregon, I was filled up with impressions, was broke and was running out of time. So after a quick ride down Highway 1 to Los Angeles, the Nimbus was put in consignment there, and I flew back home. Didn't get to see Yosemite, Death Valley, Las Vegas or Grand Canyon.

This time I'll start in L.A., see the above sights - to mention but those few - and travel in better comfort and slightly faster than first time around. Not necessarily in better style, though, as far as the motorcycle is concerned: The Nimbus is originally a 1934 design; it looks good, has eight exposed rocker arms sure to thrill audiences, and is clearly an old bike - charming, yet a bit slow and not all that comfortable.

The MZ, on the other hand, will win no beauty contests. But being decades younger and built for awful East German roads, it has soft suspension at both ends, handles well and keeps up with traffic better (see www.motorcycleclassics.com/classic-german-motorcycles/iron-pig-mz-motorcycles-zmmz11sozraw). In addition, this particular example has been modified with a later 5-speed gearbox, a Mikuni carb, modern electrics and some chassis improvements.

Being a GoldWing rider trapped in Nimbus rider's body, I like to carry a lot of stuff when on the road, so supplementing the topbox and sidebags, the MZ has a Czechoslovakian PAV 41 trailer in tow. I have no idea how it'll handle with the trailer, but cross my fingers. 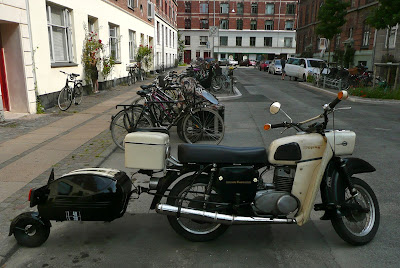 The MZ has been shipped to Los Angeles, where Kaj Pedersen of 'Nimbus Club of America' keeps it until I show up in mid-April. And a back-up Nimbus has been sent to Travis Scott, up near Pike's Peak in The Rockies in Colorado. This is in case the MZ croaks somewhere along the way, so I can continue traveling on a bike I know well, without the bother of having to find another oldish bike locally. The plan is to sell both bikes when the trip ends in late June.

Packing With A Paperweight - April 16

All tickets are bought, every single piece of luggage checked on a paperweight, and the numerous Nimbus parts - six main bearings, cylinder head, footboards, exhaust manifold etc. etc. are distributed so neither suitcase will exceed the weight limitations. All that remains is to buy 'Gammel Dansk' at the airport, for the Nimbus guys in L.A. ('Gammel Dansk' [Old Danish] is a bitter schnapps that tastes like biting an old head nurse in the arm. One has to be 5th generation North European to fully appreciate it). 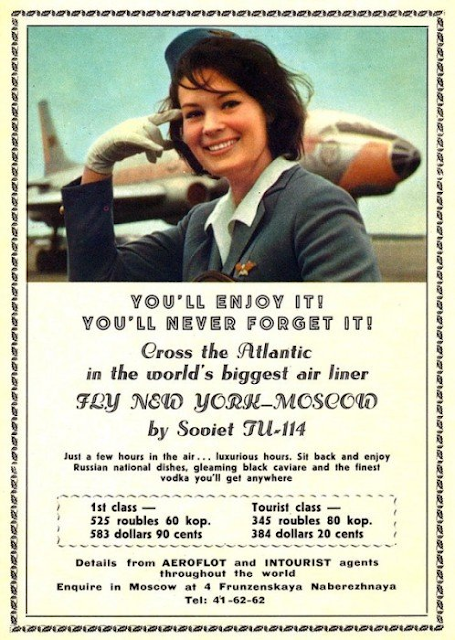 Uneventful flight, no problems getting all the Nimbus parts through customs - cheerful officer happy to see just the Nimbus Stovepipe footboards - and I'm in. Irwin, an old friend from since forever, waits with his New Beetle convertible, and we head for Manhattan. He drives like Annie Hall did in her old Beetle convertible, yet still yells at larger cars pushing their way into our lane ("He's dangerous!! I'm only pretending to be!!").

There's a Maserati parked outside my old building, same spot where I used to bumper-muscle into place my '67 Chevy Caprice beater dinosaur. They even park Harleys outside overnight. But then I already knew that the area gone upscale a bit; the Maserati wouldn't have lasted long back then.

It's been almost a decade since I was here last, but the place still feels like home.

Another friend from the old days tells me to come over, once my foray into the Strand bookstore is over. Sean lives in The East Village with his wife Kyoko, and we go for a walk in the neighbourhood. Which of course is being gentrified too. Still there's a number of excellent murals, and the Britbike oriented motorcycle shop is still there too, looking as scruffy as ever. A couple of 1960s-70s Triumph twins with underslung TT pipes are parked outside, and inside on the upper level, more modified British twins are to be found (https://www.motorcyclistonline.com/sixth-street-specials-new-york-rock-town-cafe-nation).

The owner of the place, Scotsman Hugh Mackie, is busy working on a flattracker, and laughs when I tell of me riding the MZ across the country. Flashing a pic of my Nimbus on Fuji Speedway in Japan gets his attention, though. Nice chap, so I promise to drop by on the MZ in a couple of months. 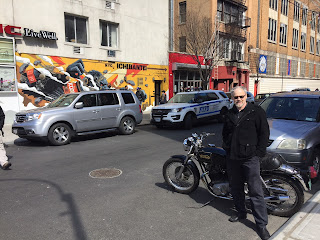 Sean Adair posing with a Norton Commando, like the one he once rode. Of course he eventually moved on to BMW GS - three of them in fact; one got stolen, one got burned, and the last one he sold. Even if he lives in a commercial building where one can ride a large motorcycle into the elevator. 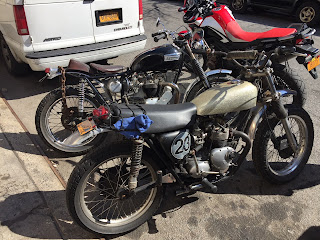 Simple, purposeful and a bit on the rough side.
The larger twin behind the 500 cc one has a magneto ignition. 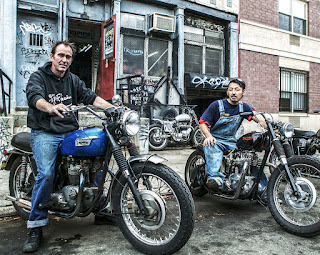 Hugh Mackie and Fumi outside the shop (pic stolen from a story about the place). 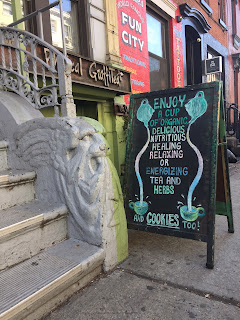 Giger-like stair decorations.
(Q: Giger who? A: Hans Giger, the Swiss artist behind the sets of the first Alien' movie). 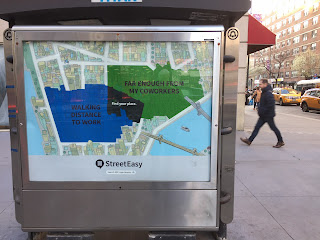 This is New York advertising. Not sure if it'd work anywhere else. I just love this city....

Cold, rainy, I go to see the 'Freedom Tower' that replaced the Twin Towers at World Trade Center. I'm still sore about it, in part because it was my city they attacked, and in part because the original buildings looked great, whether seen from miles away or all the way up close. Plus my ex had her office there. Always a very late sleeper, that fateful day she was stuck on the subway and so was thankfully not in danger. 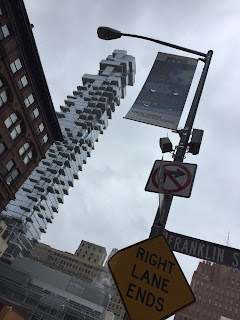 One of many new highrises, where the architects at least tried to make it look interesting. The jury is still out in regards to how well the experiment went. 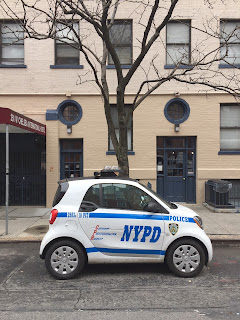 Most NYC cop cars a macho looking SUVs, but this is not one of them. 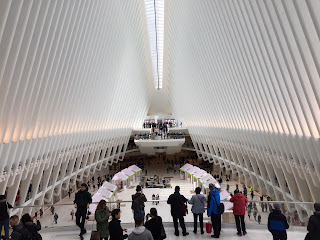 While the Freedom Towers looks bland, the new shopping mall next to it is all but that.  From the outside it looks like the skeleton of a prehistoric monster, and on the inside like the cathedral of The Church of Superfaith 3000. 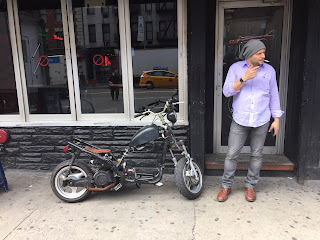 Want a cool looking custom bike, but don't want to sell non-essential parts of your body to afford it? Strip a small scooter of its bodywork, tank, saddle and silencer. Then add a Sportster style tank, a small leather seat, paint it black and you're done. The owner uses it for commuting from Queens.

Another uneventful flight, 5 hours from JFK to LAX, and then a foretaste of what the LA freeway system will be like. I had carefully timed it so I'd get there during rush hour, so it was a while before the SuperShuttle dropped me off at Kaj's place. Kaj Pedersen has lived in The States most of his life, and some years ago started up Nimbus Club of America. I'll hang out at his home for a week, before going riding with him and some of the other Nimbus guys.

The shipping company wrote they'd deliver the MZ some time around noon, but it's 5 pm and I see no bike. Maybe tomorrow - some Americans work Saturdays too. So instead of uncrating and reassembling the motorcycle, I sit and talk with Kaj and his wife Debbie, until the second installment  of jetlag sneaks up on me.

Saturday comes around, emails & phone calls to the shipping company lead absolutely nowhere, and I resign myself to the fact that I probably won't be riding until Monday. Plan was to meet Jesse an hour south of here in the small seaside town St. Clemente*, but when I talk of taking the train down there, he offers to drive the two hours up here from San Diego. Jesse runs the excellent car blog www.justacarguy.blogspot.com, that I have been following for years.

When people criticize his blog for one reason or another, he's pretty clear in his responses, to the point where I think Jesse could teach John Bolton a thing or two about not taking crap from anybody. Which is but one reason I like the blog. Anyway, Jesse shows up, gets all exited about the Nimbus' rocker arms - like the natives always do - and we end up talking all afternoon, which passes much too quickly. Former US Navy (submarines), former prison ward, now a photographer and of course a dedicated car nut, there's a lot of ground to cover.

* Googling 'best cafe st clemente' brought forth a list, where the first 8 choices were vegan ones. Based on the aforementioned responses Jesse dishes out, I figured he'd drink blood and eat raw meat most of the time, so vegan is out. Turns out he's a perfectly reasonable person, easily excited about things and really a car enthusiast to the fingertips (thank you, Hotwheels). 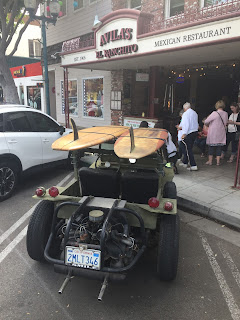 Dune buggies were invented in Southern California, so seeing them om Main Street down towards the beach was no surprise. 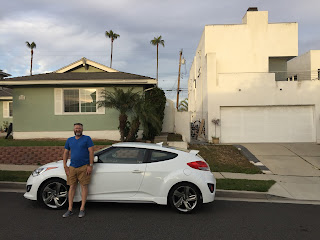 Dave Jensen, one of the Nimbus guys, shows up, and after some hours of talking and bs'ing he and Kaj go to work on a Nimbus, that the latter has been tasked to get running. It has been standing still for way too long, and it shows. It needs a new rear tyre, points, a condenser and a major cleaning and adjustment of everything, but after twenty or so primer kicks it starts. The engine sounds good, and we have yet to discover an oil leak of biblical proportions. Riding the poor thing, however, is a different matter, and I'm the sacrificial lamb here. 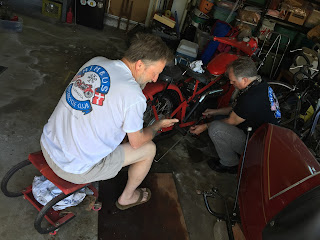 Over the last 15 years Kaj has probably worked on 30-35 Nimbuses here in the US.

Heading for a biker bar 5 clicks down the road, I start counting all the things wrong with this bike, non-functioning rear brake being the most important one. It's probably the worst Nimbus I ever rode, even counting in my own ones. Then again, it still it beats walking or driving a car, and I'm right pleased there behind the handlebars, while preparing escape routes around cars in case they brake hard in front of me.

We stop at 'Mother's', a biker bar, third place with Harleys parked in front, along the costal road south. Newish Harleys seem to be the norm here: Most of the motorcycles I've seen so far are very large Evo dressers with thundering exhaust pipes and high handlebars, 400 kg behemoths that seem good for short trips only. Who knows....

Inside the bar every conceivable part of the roof lumber is covered in dollar bills, a departure from earlier when everything was covered in women's bras hanging from the lumber. There's also lots of grey and white hair, so the three of us don't make a dent as far as average age is concerned. Lots of flesh too, and lots of noise. After a while this noise gets replaced with a decent coverband, good enough to makes us stay for a bit, before we head back to Kaj's garage. 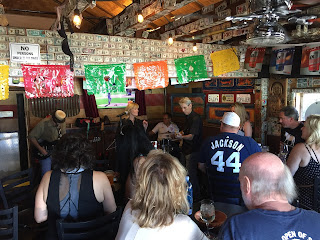 'Tammy Madsen Band' at Mother's, a biker bar crammed with a - let's say - rather mature audience. 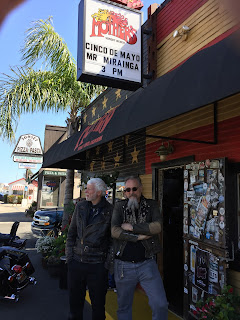 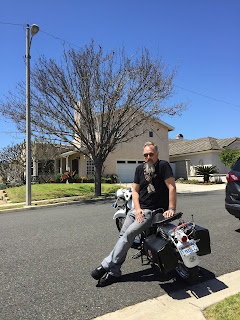 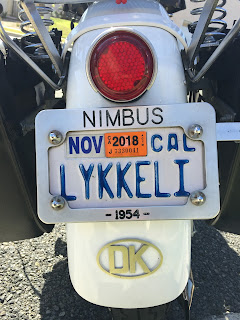 The vanity plate close up. 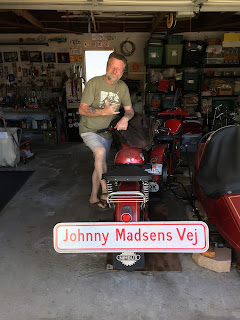 Kaj grew up in Thyborøn, very close to Danish rock'n'roller Johnny Madsen, and remains friends with him. Despite nicking this sign....